Each member entity (city or special service district) supplying wastewater to the Central Valley Water Reclamation Facility (CVWRF) serves a defined area of Salt Lake County. In general, the pipelines of the member entities are smaller and serve individual streets, neighborhoods, subdivisions, and areas within the overall collection system area of the member entity. The smaller lines discharge into larger pipelines called outfalls, which then connect to the CVWRF’s main outfall lines. Each entity owns and operates its own system of wastewater collection lines. The member entities include: 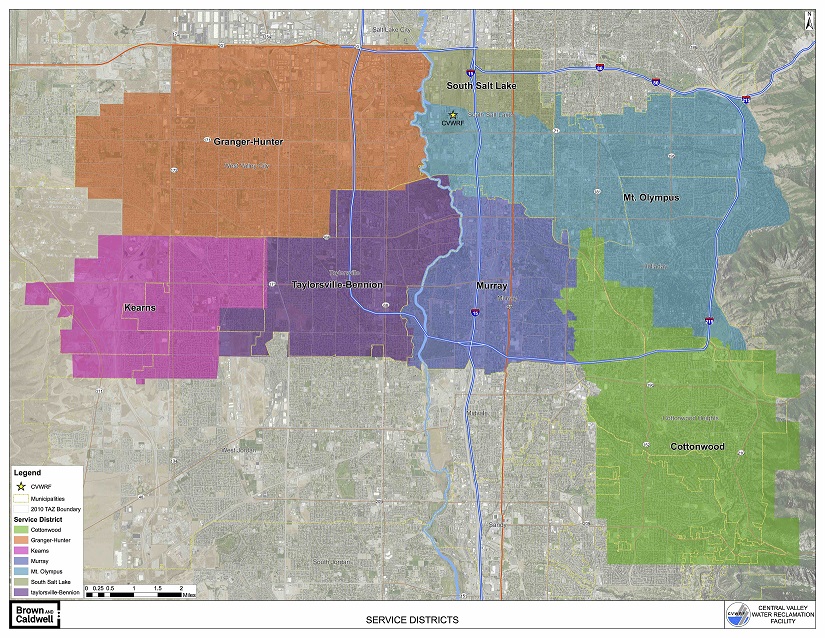 There is a flow meter and sampling station on each member entity outfall line at the point of connection to the CVWRF’s outfall lines. 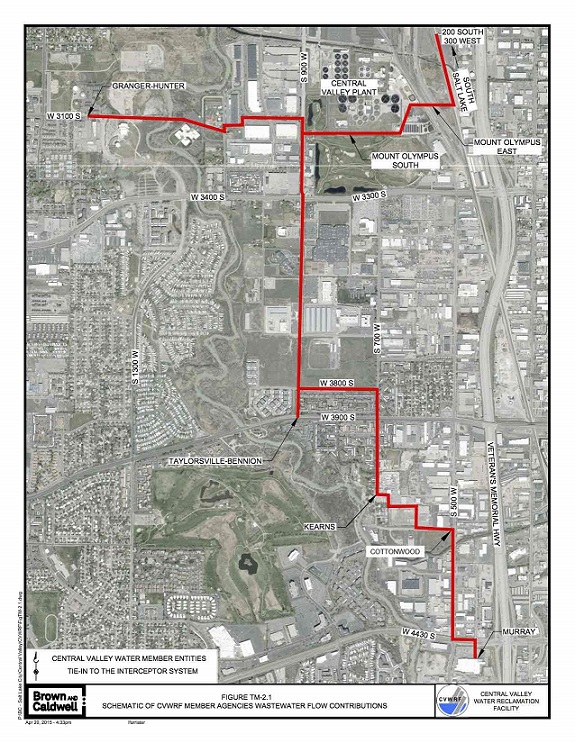 Since the CVWRF does not provide retail sewer services to individual sewer users, each member entity determines the individual monthly sewer rates for their residential and commercial customers. These monthly rates include the costs for the member entity to operate and maintain their sewer lines and the operations costs for the CVWRF to treat the wastewater, treat and dispose of the residual solids, maintain the treatment plant, and upgrade or expand the process as necessary to comply with regulations. 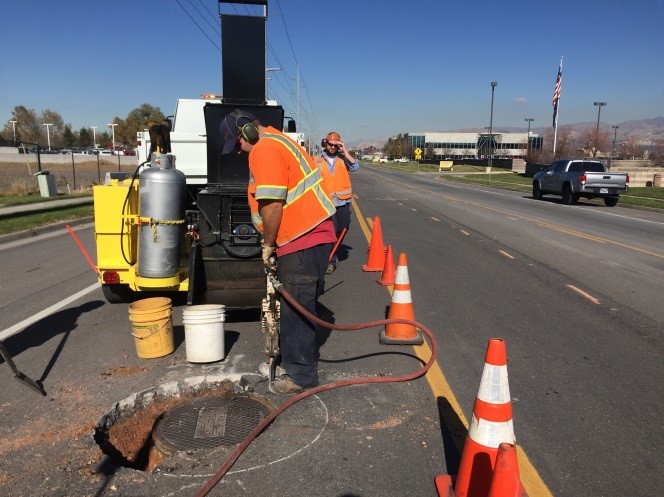 The CVWRF’s outfall lines consist of approximately 7 miles of large diameter sewer pipe with eight meter stations, 150 manholes and vaults, and two inverted siphons (one under the Jordan River and one under Big Cottonwood Creek). The pipes range in size from 30-inches to 84-inches in diameter, with most of the system having pipes that are 60-inch in diameter. Most of the lines were constructed of reinforced concrete pipe in the early 1980’s. All lines are designed to have minimum flow velocities of 2 feet per second when flowing full. The flow velocity is important since it keeps solids in the wastewater from settling and accumulating in the pipes.

Flow rates in the collection system vary throughout the day, differ from weekday to weekend and on holidays, change seasonally due to weather patterns, and can increase rapidly during and immediately after precipitation events. There are two peak flow periods during each day, one in the morning and one in the evening. These peaks correspond with higher water usage during early morning and evening activities such as showering and cleaning up from dinner. Although the higher discharges originate in the early morning, the higher flows are not received at the CVWRF until the late morning to early afternoon because of the time it takes water to travel the distance from its point of origin to the treatment plant. It takes around 8 to 10 hours for flow to reach the treatment plant from the most remote regions of the member entity collection areas.

The CVWRF Plant Flow Chart. Seven typical days of data starting on a Friday at midnight.  Note the diurnal flow pattern and the higher weekend flows.

Properly designed, constructed, and maintained sewer lines generally have a service life of 50 or more years. The CVWRF and member entity personnel perform inspections of pipelines and manholes to look for signs of deterioration, plugging, and groundwater infiltration so that action can be taken to rehabilitate the system and minimize the risk of problems.

Deterioration of wastewater lines is normally due to corrosion from the formation of hydrogen sulfide gas. Hydrogen sulfide gas is formed when organic material in the wastewater degrades anaerobically within the pipe. It then converts into sulfuric acid by bacteria on the pipe wall near the crown of the pipe. This acid attacks the pipe wall material and, if the corrosion is ignored, can eventually lead to collapse of the pipe. This phenomenon is known as “biogenic sulfide corrosion” or “crown rot.”

Corrosion is of particular concern in CVWRF lines because the wastewater remains in the piping for a long period of time before it reaches the CVWRF treatment plant, with plenty of time for biological degradation and hydrogen sulfide formation to occur. To date, the CVWRF has rehabilitated approximately 20,000 feet of line using corrosion resistant fiberglass cured-in-place pipe (CIPP) lining systems (Insituform.com) for smaller lines (less than 42 inches in diameter) or fiberglass reinforced pipe slip lining systems (Hobas.com) for larger lines (more than 42 inches in diameter). 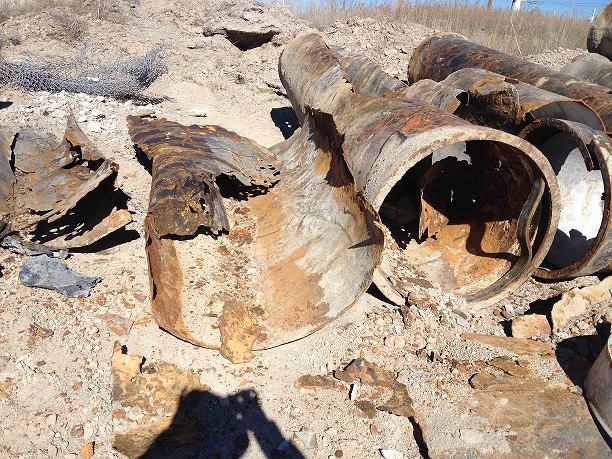 Example of Biogenic Sulfide Corrosion of 30-inch mortar lined ductile iron sewer pipe that was part of the CVWRF’s Granger-Hunter Siphon Line under the Jordan River. Note the total perforation of the pipe crown. This 32-year-old pipe collapsed and was replaced in 2014.

An additional advantage of rehabilitating the CVWRF’s sewer pipes with corrosion resistant fiberglass lining systems is that the expected lifespan of the pipe is increased by 80 to 100 years, significantly reducing the cost of service for future generations. 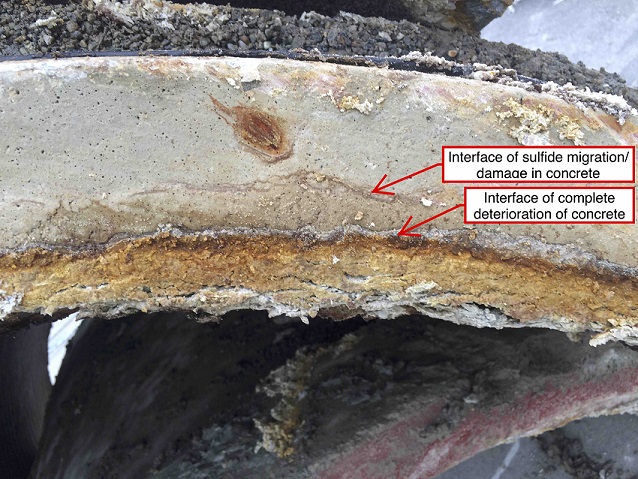 Example of Biogenic Sulfide Corrosion of 60-inch concrete sewer pipe that was part of the CVWRF’s 900 West Interceptor Line. Note corrosion moving from the inside of pipe through the thickness of the pipe wall. This 32-year-old pipe was slip lined in 2015. 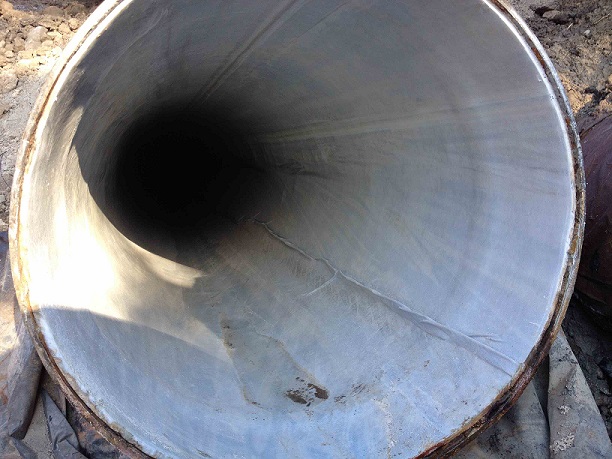 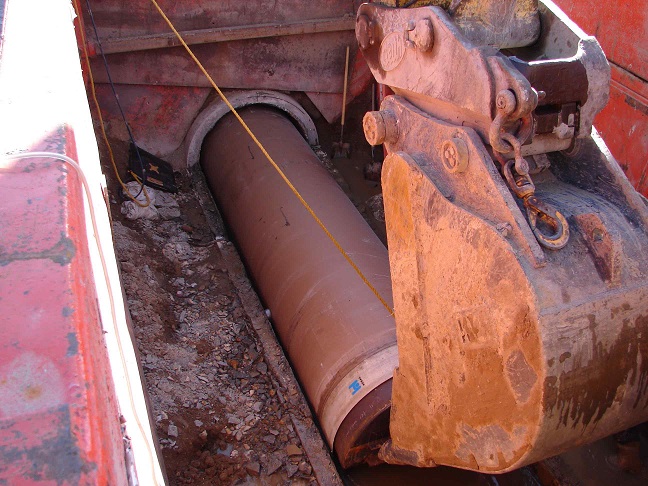